The final tallies for the 2017 hurricanes aren’t in yet. 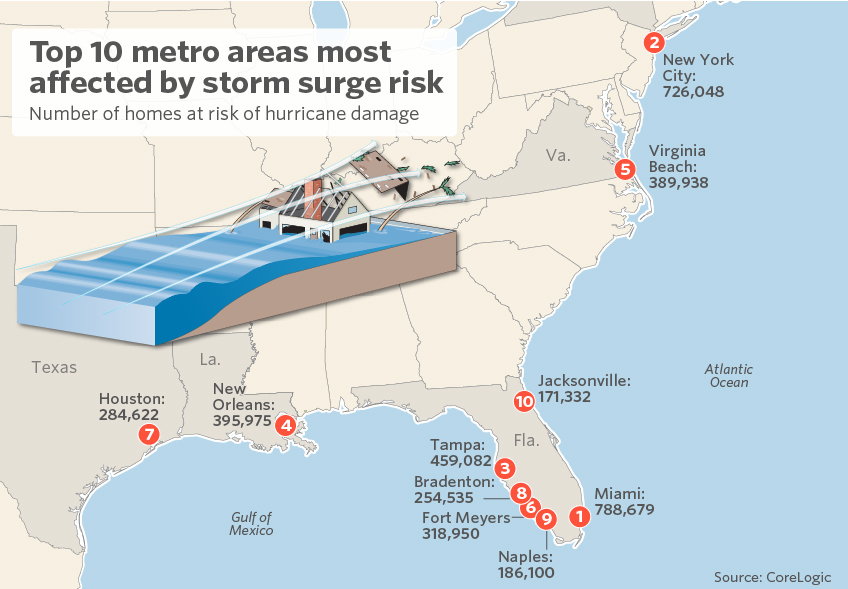 If the start of summer has you trying to reason with hurricane season, you’re not alone. Millions of homes across the U.S. sit in harm’s way, and the resulting damage could be in the trillions of dollars, according to a report out Thursday.

Those estimates come from real-estate data provider CoreLogic, and are based on forecasts from the National Oceanic and Atmospheric Administration that expect the 2018 Atlantic hurricane season to be “near- or above-normal.”

This year, nearly 7 million homes are at risk of hurricane storm surge, CoreLogic said. That’s the same number as last year, when NOAA predicted an “above-normal” season. But total reconstruction costs are forecast to be more than $1.6 trillion this year, a jump of 6.6% compared to the $1.5 trillion estimated in 2017. The driver? Higher costs for construction, equipment and labor.

Here’s a breakdown of the top 10 metro areas most at risk. (CoreLogic has the top 15 metro areas, as well as breakdowns by state and other categories.)

The final tally for hurricane season last year remains incomplete. The two largest storms, Harvey and Irma, are estimated to have cost between $40 billion-$59 billion and $29 billion-$46 billion, respectively, but there’s no accounting yet for the other storms, Dr. Tom Jeffery, senior hazard scientist at CoreLogic, told MarketWatch.

One thing is consistent between 2017 and this summer: Once again, the National Flood Insurance Program is set to expire in the middle of hurricane season if Congress doesn’t take action.

The federal program is the only option for many homeowners in areas where such insurance is required. Many politicians and housing industry participants agree that it would be better to have more private-sector options, but true reform of the program has proved challenging.

The National Association of Realtors is again lobbying Congress for reauthorization before the July 31 expiration to avoid disrupting the housing market. The lobby group said each time the program lapses, it costs 40,000 property sales per month. What’s more, because each insurance policy is written for one year at a time, a lapse in a policy attached to a mortgage may constitute a default.